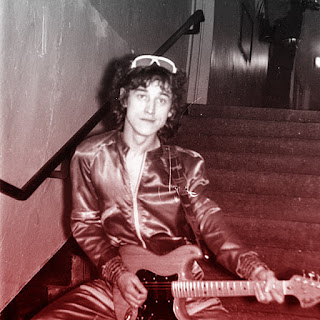 Second post dedicated to Lady Pank. In this anthology I collected ten songs released only as singles or compilation tracks during the new wave phase of Lady Pank's career, lasted from 1982 (the year of their debut single) to 1986.
These are ten of the best songs in Lady Pank's book and arguably in the history of Polish music.

1. Mała Lady Pank
2. Minus 10 w Rio
These two songs were released as Lady Pank's first single in summer 1982. Guitar player Jan Borysewicz is also the singer in "Mała Lady Pank", because Janusz Panisewicz was not in the band yet: he joined in for "Minus 10 w Rio", where he sing the chorus.

3. Tańcz głupia tańcz
Released as a single at the end of 1982, it is one of the band's key-songs: it was the first entirely sung by Panisewicz and it opened the historical Sopot 1985 concert.

4. Augustowskie noce
Released as a single in july 1984, this is a funny cover of Maria Koterbska's old pop-jazz hit.

5. Sztuka latania
This lyrical post-punk moment (the title means "The Theory of Flight") is possibly Lady Pank's most beautiful song. A no. 1 hit in april 1985, it also titled an important compilation album featuring Aya RL and other Nowa Fala projects.

7. Raport z N.
8. Rysunkowa postać
This no. 1 single was released in the summer of 1985. "Rysunkowa postać" was the B-side, even though it was the most successful song.

10. Sly
This is not Lady Pank's first song in English, but while the others were all translations of their Polish hits, this is the first original one. It was released as a single in 1986.